Roman Reigns having a perfect run without a Championship

Roman Reigns was forced by bad health conditions to relinquish the WWE Universal Championship in 2018. Reigns who was diagnosed with leukemia revealed that he had been quietly battling the disease for over a decade. The exit of The Big Dog, especially when he was at the prime of his career, left his fans in anguish. But after he made his return in February this year, Reigns has been able to generate the same amount of electricity which he was entitled to.

Reigns made his return on February 25, 2019. He revealed to the Raw crowd that he had successfully defeated leukemia yet another time. Reigns and Rollins later in the same night assisted Ambrose from an attack by Drew McIntyre, Bobby Lashley, Elias, and Baron Corbin. Fans started to speculate a reunion of The Shield. And the speculations were not wrong as The Shield went on to defeat the team of McIntyre, Lashley, and Corbin at Fastlane.

Following the episodes of February, Reigns was involved in a feud with McIntyre as the latter challenged him at WrestleMania 35. And to no one’s surprise, Reigns defeated McIntyre on the match-day.

After being drafted to the SmackDown brand during the 2019 WWE Superstar Shake-up,  WWE’s announcers honored Reigns as “SmackDown’s greatest ever acquisition”. He was considered the future of WWE SmackDown LIVE.

Roman Reigns even attacked Vince McMahon, knocking him out with the famous Superman Punch. Reigns were then involved in a tussle with the junior McMahon. Shane McMahon challenged Reigns to a fight for attacking his father. Reigns were too happy to accept as we all knew the outcome of the match. Things went south after he was attacked by Elias from behind. This feud between Elias and Shane on one side and Reigns on the other continued into Money in the Bank. Reigns won the match at Money in the Bank. But Shane was still unable to let it go and the two again faced each other at the Super ShowDown. Reigns lost the match due to interference from McIntyre. This is when The Big Dog decided to put an end to all the commotion, once and for all. Reigns first crushed McIntyre at Stomping Grounds. Later with The Undertaker’s help, Reigns defeated McMahon and McIntyre in a No Hold Barred tag team match at Extreme Rules.

Reigns were then attacked by a mysterious attacker just before SummerSlam. Reigns investigation regarding the attacker eventually rounded off to Daniel Bryan and Erick Rowan due to testimony from Murphy and seemingly incriminating video footage. Later it was revealed that is Rowan who attacked Reigns. Rowan had a brawl with the Big Dog which ended with Rowan knocking Reigns out with a jib camera.

The two faced each other for yet another time at Clash of Champions in a No Disqualification match. The match again ended Rowan winning with interference from a returning Luke Harper. All this interference involving Roman started to get to his fans. Reigns later teamed up with Bryan to defeat Rowan and Harper at Hell in a Cell in a Tornado tag team match. Reigns also captained Team SmackDown at the 2019 Survivor Series and earned the victory for his team as the sole survivor.

One might say that post his return, Reigns hasn’t got a match of much importance and has been involved with less important feuds but, nevertheless the way Roman’s storyline is shaping up, it does not take a genius to understand that he is definitely building up to a Championship rematch which he is yet to get. And, despite being Title-less for over a year now, Reigns is having quite a good run. Be it at the Raw, or his storyline at SmackDown. In whichever territory Reigns is going he is marking it to be his own and for good.

According to fan speculation which is also being confirmed by experts, Reigns might be back as the top-tier superstar by next year. It has been too long since his return and he is entitled to a title opportunity. And according to the recent WWE News, the title at which Reigns might get a shot is none other than the same title which he had to relinquish, The Universal Championship. And his opponent will be none other than “The Fiend” Bray Wyatt. What is in store for the Big Dog of WWE, only time will tell. 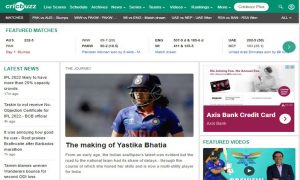 The excitement of cricket is spreading across the globe where fans support their national team. The sport is now one of the most watched and loved games played by all ages of players. However, not everyone is fortunate enough to Watch Live Cricket IPL Online via Cricbuzz websites. There is a problem due to network […]

Personalized water bottles are designed for separating your bottle from your teammates at the time you are playing any sport. There are many people concerned about general hygiene and health. With this, one can easily prevent himself from any illness on sports teams, which will be possible only by restricting the amount of germ exposure […]

Employment is a big problem in India and the government is focusing on solving it. People keep waiting in the queue for having a good and secured job. Different aspirants want to get themselves positioned in reputed industries. One of these industries is the sports industry. When we open up any news channel, we can […]